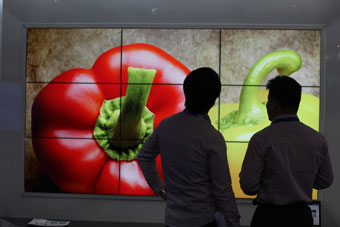 “Interior digital signage looks simple on the surface—just  a flat panel display connected to a computer,” says Alan C. Brawn, whose Brawn Consulting is located in Vista, California. “But the deeper you go, the more complicated it gets. So if you just jump in with both feet, you can sink.”

This poses a dilemma for many sign builders, because traditionally the craft of signage involved using hand tools to fashion an outdoor sign made out of basic materials such as vinyl and then painting and installing it. The arrival of LEDs brought a degree of high-tech and complexity but nothing like that involved in the interior video/LCD displays.

These signs are now rapidly showing up in applications for markets such as retail, transportation, hospitality, education, entertainment, and other areas.

Since interior digital signage appears to be the wave on which the future of signage is riding, the question is: How can a sign builder not be swept aside by this wave but instead ride its crest to success?

If the future of signage is digital, there’s no reason why you can’t be a part of it. “The two questions I’m most asked by sign shops are: ‘How do I get started?’ and ‘How do I sell my first one?’” says Brawn.

It can be difficult to find objective answers to these questions. “A number of years ago, I started going to all of the seminars on interior digital signs,” says Brawn. “I found out that, in a one-hour seminar, the manufacturer was offering minutes of a sales pitch.

“I decided then that someone was needed who didn’t have a dog in the race—an impartial agnostic.”

So about four years ago, Brawn became the founder/director of the Digital Signage Experts Group. The purpose of this group was to answer the questions raised above.

And the answers rest in education. “We became the first digital signage certification organization,” says Brawn.

This process involves eight hours of education on-site or six hours online, and both culminate in a test. If the participant passes, they’re provided with a certification that is now recognized in 60 countries and by over 4,000 manufacturers.

All of this led to the formation of the Digital Signage Federation (www.digitalsignagefederation.org) about a year ago. Brawn is vice chairman of the organization, which represents a constituency of all of the players in digital sign technology (including digital manufacturers, distributors, network designers and operators, advertising and content creation people, and end-users). “We realized we have to talk to everybody,” says Brawn.

There are also a number of other organizations that provide education for sign builders.

One notable is the Roswell, Georgia-based Digital Signage Expo, which has been around for about eight years. “[Our] organization is the largest tradeshow dedicated to digital design and networks,” says Editorial Director Richard Lebovitz.

In fact, Digital Signage Experts Group conducts its certification workshops at the Expo shows. “We also have our own educational programs, including a series of workshops at shows and seminar programs,” says Lebovitz.

It’s agreed that education is the key factor for sign builders looking to successfully enter this arena. So what should this education provide?

Here are some of the digital signage basics that all sign builders should learn about:

In addition to these points, it’s also important to be aware of financial considerations. These include the costs of material, personnel time, installation,  support, and what has to be charged to make the desired margins.

For instance, a retailer might want to see a 25 to 35 percent return on investment. But information in a doctor’s office or airline terminal might be measured more in return on objective. There are also opportunities for the client to allow outside advertisements on their displays.

With this knowledge in hand, how does a shop make that first sale? It may be easier to get into the field gradually.

“You can partner with someone who’s already in the business—a manufacturer or maybe a distributor. Or it might be another sign shop,” says Bryan Marks, marketing director for Irvin International, a digital signage manufacturer/distributor in Tampa, Florida. “You might start off with smaller margins, but your learning curve will be easier and you’ll be spared big capital investments.”

“My recommendation is to find a partner in an analagous business,” says Lebovitz, “such as an audio/visual installer or systems integrator. You may be in a partnership in which you compete in some ways but end up more complementary than competitive.”