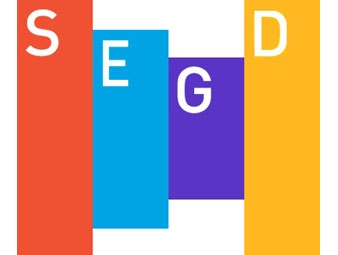 Winners in the 2014 SEGD Global Design Awards—the only international design competition focused on visual communications in the built environment—will be awarded in five new categories representing how experiential graphic design impacts the world.

Since 1987, SEGD’s Global Design Awards have honored design that connects people to place by providing direction, content, and compelling experiences in the places where they work, play, learn, travel, shop, and gather.

“We want to make sure our design program reflects the full and expanding spectrum of work across experiential graphic design,” says Clive Roux, SEGD’s CEO. “These categories represent not only the ‘traditional’ aspects of EGD, including wayfinding, exhibitions, and branded environments, but also encompass the emerging world of digital applications that is rapidly changing the face of the discipline.”

In addition, Roux notes, “As a field, we are dedicated to evidence- and research-based design and encourage entries that reflect work in design research, strategy, and planning.”

“Organization leaders, developers, and city planners have come to understand the impact of this work on their brand and identity and the customer and visitor experience they deliver. This work has proven economic impact.”

Winners will be announced at the 2014 SEGD Conference: Convergence June 5-7 in Atlanta and will be featured on segd.org and in eg magazine. For online entry and an archive of award-winning projects, including photos, project descriptions, and jury comments, visit http://segd.org/awards.