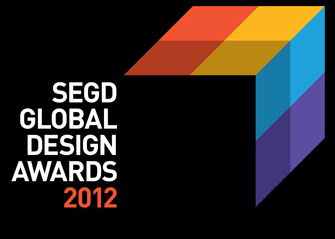 In its 25th Anniversary year, the SEGD Design Awards Program, which honors excellence in environmental graphic design, has a new name and a new global profile.

Now known as the 2012 SEGD Global Design Awards to incorporate its increasingly global profile, the program is accepting entries on its Web site.

The program’s new identity, designed by Pentagram partner Michael Gericke and his team, builds on the SEGD logo and color palette. The graphic is a digital cube, portraying the multi-dimensional work and wide range of media in the competition’s entries. “At 25, the SEGD Global Design Awards have come of age and deserve a grown-up identity all their own,” says Gericke. “It’s been amazing to see the growth of the awards program and the incredible quality of the entries from around the world.”

Launched in 1987, the program has grown to attract entries from around the world, including 450 from more than 30 countries in 2011.

“This reflects not only greater awareness of SEGD around the world, but growing recognition of how environmental graphic design can positively impact the built environment in a multitude of ways,” says Edwin Hofmann, associate vice president of design for Limited Brands and chair of the 2012 SEGD Global Design Awards Program. “Great EGD happens when cross-disciplined ‘creators’ collaborate to develop inspired, information-rich, emotionally compelling experiential spaces.”

The program deadline is January 31, 2012, with a “late deadline” of February 14, 2012. The entries will be judged by a multidisciplinary panel led by Hofmann. Some of the panel members include Alan Jacobson, president of experience design firm ex;it; Luke A. Snider, head of design for Procter & Gamble’s Baby Care, North America; and Lucy Holmes, creative director and founding partner of Holmes Wood in London. Visit the Awards site for a complete list of panel members.