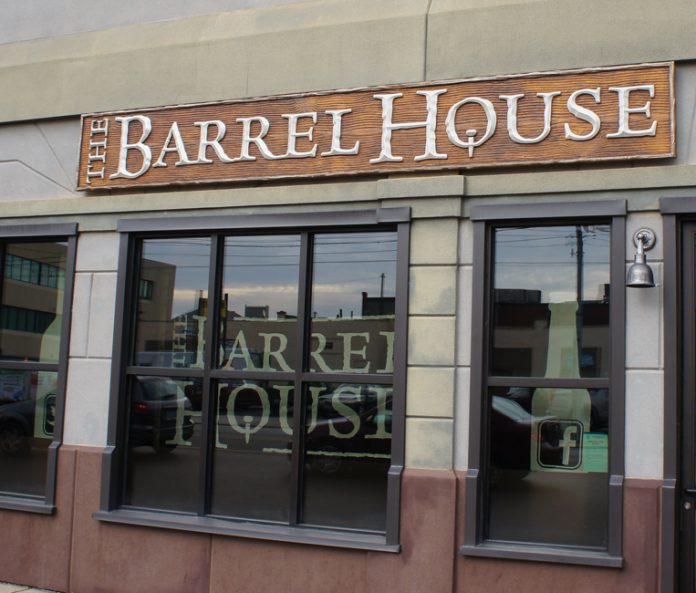 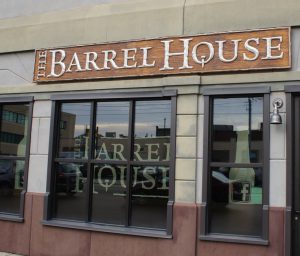 There’s something nostalgic about a wood sign. So it really should not be surprising that people want to have signs that appear to be made out of wood but without the drawbacks—rotting, warping, or deteriorating.

Brian Quinter of Quint Creative Signs in Piqua, Ohio has created hundreds of faux-wood grain textured signs from Precision Board HDU so it’s become almost second nature. His shop has even given them names for it—“Basic Wood Grain Texture” and “Super Realistic Wood Grain.”

Quint Creative Signs creates one-of-a-kind signs that will help set any type of business or organization apart from others. I talked to Brian about some of his recent projects and the tips and tricks he uses for making faux-wood signs from HDU blanks.

Quinter first started making faux wood signs seven years ago that looked like sandblasted wood signs. That changed when a job came to him about four years ago for The Barrel House, a beer house in Dayton, Ohio.

The Barrel House owners wanted something that looked like an old sign that may have been found in a barn with deep wood grain and a natural wood finish. That was when Quinter started making his Super Realistic Wood Grain textured signs.

Quinter often finds a texture first on the Internet and uses it to create a 3D Component. The second he creates using CorelDRAW, which he converts to a bitmap and edits in Corel Photopaint.

He uses an Eye Candy plugin from Alien Skin Software to make his grains look how he wants and then creates a 3D Component. Quinter then bakes both textures together as one 3D component and finishes the design in Vectric Aspire.

Quinter produces all his faux-wood signs on his AXYZ Z7 CNC router. 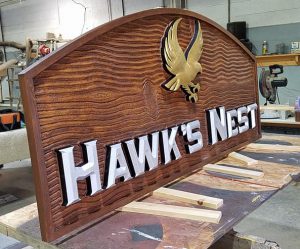 “At one of the first tradeshows I went to years ago, I saw a CNC router in action, and that got me interested in three-dimensional signs,” says Quinter, recalling why he uses this machine for his dimensional sign work. “However I couldn’t get into CNC right away because of the expense.

“So I did as much as I could, at the time, with hand-routers and jigsaws to cut out my own 3D lettering and 3D elements.”

Seven years ago, Quinter received a low-interest rate grant from the city designated to help business growth. He purchased his first CNC router, and the rest was history.

“I don’t do any sandblasting,” he says, “just exclusively a CNC router.”

He uses a 3D Finishing toolpath for his faux-wood HDU work.

“I usually include elements like knots and often bring the texture and faux painting onto the framing of the sign. I find having some machining lines help make it look even more like wood when we do the glazing after we paint it,” said Quinter. “We typically use a 0.25 bullnose bit for all my wood grain and knots, unless it’s a smaller sign, where I’ll then use a 0.175 router bit.

“I do basic textures using Aspire’s Texturing Toolpath tool, but I like to do Full 3D wood grain for the higher-end signs.”

He typically primes and paints the surface, preferring not to add a clear coat or face coat. The big challenge is, if you’re trying to mimic a certain type of wood, finding the right colors at a paint store or through a paint vendor.

“If we’re doing a solid painted background, it’s pretty straightforward when it comes to color choice. Sometimes you have to pick the right colors so the contrast works,” he says. “But with Super Realistic Wood Grain, there are several steps, and you have to be aware of what the colors are going to look like when you start making glazes out of all of them.”

Quinter says that he prefers HDU blanks over actual wood because he can control what he makes.

“If I’m using wood and trying to expose the natural grain, I don’t know what I’m going to get. If I hit a knot, it can mess me up,” he says. “I can deliver what I’m designing without worrying about problems during fabrication and my client gets what they have been shown in a proof.”

The property’s owners wanted a rustic appearance for their sign, which is why they went faux-wood instead of flat plastic or aluminum.

Nova Color paints and glazes were used for the entire project, including the metallic silver and gold.

Quinter used convex letters to give the sign some highlights and shadows.

“There are a lot of little touches that help bring it together that may not be noticed by the normal person,” says Quinter. “If you look at the letters, the sides are painted black, and the front is painted the main color for the letter.”

Getting Started on Your Own

Fortunately Quinter has some advice for those just starting out with faux-wood signs.

“The hardest thing is color choice when you start painting it,” he says. “Some of that is experimental to achieve the wood look.

“Prime it. Give it a base coat with a mustardy color. Glaze it and then wipe it off to give it highlights. Start with lighter and work to darker colors. Textures also help when glazing and leaving some of the darker colors of paint set in the texture.”

“We just replaced some sandblasted wood signs for Tipp City Parks that were faded and deteriorating and used Precision Board HDU made to look like wood,” says Quinter. “They came to me first asking if I could repaint them. But by the time it would take to clean them off enough to repaint them, I convinced them that it wouldn’t have cost that much more to do a new sign in HDU.”

The project involved mimicking the original design of a sandblasted cedar redwood sign, which meant going with a basic woodgrain for the background.

“We’ve done three signs for these parks so far,” says Quinter, “and we are supposed to do four or five more of them this year and more over the coming years, according to their budget.” 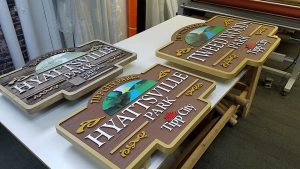 Attaching letters and decorative ornamentals to these signs varies on application. The letters for the Hawks Nest and Barrel House were applied directly to the face using silicone.

“Sometimes, if we have access to the backs of the signs, we’ll just do a stud and bolt it on the inside, since HDU is so light.”

Quinter notes that faux-wood HDU signs provide a classy, traditional look, so they are popular with markets desiring a higher-end presentation. The funeral home industry is one, in particular, that he has noticed.

“Appearance is a big thing with funeral homes,” he says. “As soon as one goes up there, their competitor down the road is asking us about doing a faux-wood sign for them.”

Attorneys are also attracted to these types of signs. “Faux-wood helps them achieve the high-end look they need to be able to get clients,” says Quinter.

By Tai Freligh, marketing associate at Coastal Enterprises. Portions of this article first appeared on their blog at precisionboard.com. Some additional reporting for this piece was provided by Jeff Wooten. 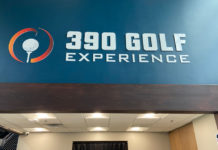 This Signage Package is an Ace in the Hole 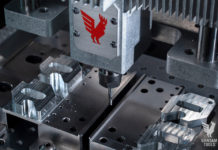