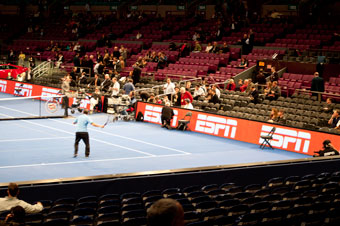 Tennis greats such as Andre Agassi and John McEnroe squared off recently for the 2011 BNP Paribas Showdown at Madison Square Garden. However spectators and home viewers alike were able to take in more than just great tennis playing, because for the first time ever at a professional U.S. tennis event, LED signage was used surrounding the court perimeter.

ANC Sports Enterprises, LLC supplied and installed the signage for the event after being contacted by Star Games. This company had previously worked with ANC on an LED perimeter signage set up for an ice skating event, and officials wanted to see if LED perimeter signage could also benefit the tennis event.

“After collaborating with ANC at our recent Caesar Tribute skating show, there was no question that we wanted to include this technology at our tennis events,” says Jerry Solomon, president and CEO of Star Games. “The flexibility and features within the ANC system allow us to be on the cutting edge, which is a great addition for our sponsors and fans.”

Rather than build a new custom system for the indoor event, the two companies decided to save on costs and utilize an outdoor system ANC already had—its Mitsubishi Electric Diamond Vision 22 mm display.
“There were some concerns if the system that’s really built for outdoors would be okay [here],” admits Michael Hopkins, director of communications and marketing for ANC.

ANC voiced its concerns to Star Games from the beginning, but once on-site, ANC was able to tweak the display so that it worked for the indoor event.

“We were able to adjust the color brightness from our processor and make even more adjustments [with the VisionSoft operating system],” says Joe Matrone, operations manager for ANC. “I think between the tight graphics and being able to make the right color adjustments, it really maximized the outdoor LED to look good in an indoor venue.”

ANC started getting the system ready at its Atlanta, Georgia warehouse a week before the event. The display system needed an overhaul after getting damaged and dirty at an event over the summer.

“Our prep work started a week before, where we actually met the power requirements that we knew we were going to be given and did a mock set-up down in our warehouse,” says Matrone. “[We] did an overall cleaning. We also did some touch-ups on the tops of the cabinets—just to give it an overall better appearance.

“For any sort of modules or bent pixels that needed to be replaced, we did all the replacements down there.”
The cabinets were then crated and loaded onto a truck for delivery. ANC sent extra cabinets to the venue as a precaution. “We were planned for fifty-four cabinets, however we sent more than fifty-four cabinets, because we knew we weren’t going to have time, if one of those cabinets for whatever reason didn’t light up,” says Hopkins.

Installation began bright and early for Matrone, who arrived at the venue around five o’clock in the morning. The truck was slotted to come into the loading dock an hour later at six o’clock.

“It was crucial that we were there before six o’clock and actually ready to unload when the truck arrived, because of the renovations going on in the building,” says Matrone. “There were other vendors as well waiting to get into that dock—everything from concession stand operators to you name it.”

As a result of Madison Square Garden’s packed schedule, ANC only had a few hours to unload, install, and set up the system before the event began at six o’clock that evening.

After an initial setback of an hour on set-up, ANC started dropping cabinets into place only to realize that the measurements they’d been given were off.

“We were short about two feet from the baseline where we were originally supposed to have the cabinets versus where the back of the court started, which affected the sidelines,” says Matrone.

Last-minute adjustments to the height of the cabinets were required, as well. The cabinets initially sat on the court itself, which raised them a few inches and partially blocked the front row’s view.

“They decided to pull some sections of the court out and drop these things down a few inches, which gave a little more clearance for the people in the front row,” explains Matrone.

ANC’s team of four installers worked in tandem to mark off starting points, ensure everything was dropped in the proper place, and set up the internal components and wiring.

Once the cabinets were in place, the work really started: The changes to the length and height of the signage had affected the graphics.

“Any sort of placement that’s different will throw off the graphics,” says Matrone. “[Our graphics guys] had to make a lot of adjustments on-the-fly.”

The graphics featured on the displays were actually created the weekend before the installation. Two sets were made to give the client a choice. The graphics team edited these premade graphics to fit the new display layout.

“They had to make some minor adjustments mainly to the length of certain graphics to make sure all the correct sponsors would fit in the right places when we lost one of the cabinets,” says Hopkins. “But because it was already pre-built, that was a little bit easier.”

Despite the many hurdles and time restrictions, ANC pulled the installation off in time for the event.
The perimeter signage displayed player introductions, static sponsorships during actual play, and a dynamic graphic of a tennis ball that traveled around the perimeter as sponsorships fell in place behind it during breaks.

At the end of the event, ANC had to immediately break down the system to clear the venue for the next event. The end of a very long day came when the crates were loaded back onto the truck at two o’clock in the morning.

“Overall communication between the departments really helped us be prepared for anything [during this installation],” says Matrone, dispensing advice for other shops facing a time-sensitive LED display install. 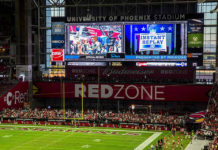