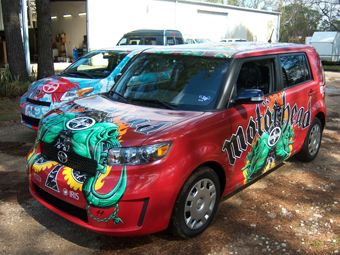 A motorcycle drag racer (and one of the world’s top ten motorcycle drag drivers, at that), Craig Treble can accelerate to speeds near 200 miles per hour in less than a quarter-of-a-mile. Treble satisfies this need for speed on a motorbike wrapped in vinyls that turn an extraordinary event into one with colorful impact.

Meanwhile at the Freeman Memorial Library in Houston, Texas, there currently exists a wall “flat wrap” featuring the drawing of a door that enters into an unknown space. It’s so realistic of a reproduction that it actually once lured a four-year old boy to attempt to walk through the wall (thinking it was a real door) on which the artist had mounted the graphic.

Whether a wall or a vehicle, these surfaces challenge the designers of vinyl wraps. These two types of wraps share no characteristics other than the fact that their artwork adheres to a surface. One thing is for sure—the design, application, and installation make a difference in the quality of the wrap.

Wrap material comes in two general categories: cast film and calendered film. Each has its own use and application. “The most important factor is whether the application surface is flat or includes compound curves, rivets, or corrugation,” says Todd Hain, marketing manager for Avery Dennison. “If the vehicle has complex curves, like a VW Beetle, or the wall or interior surface includes complex curves, then only cast films can be considered for the project. If the installation surface is flat or has simple curves—like a bus billboard, flat wall surface, or pole—then calendered films are appropriate.”

Once the film is chosen, Dustin Noble of Wrap Experts in Dallas, Texas, explains that the sign professional needs to turn his or her attention to the three general phases of a wrap project: the design, the print, and the installation.

As the sign builder begins the wrap process, he has to carefully measure the vehicle on which he’ll adhere the vinyl. Noble suggests that the designer not calculate bleed during this step of the process.

As the wrapper designs, keep in mind the “five-second” rule: An image has five seconds to convey its message. “Remember when designing a vehicle wrap that the message needs to be read clearly at a distance. You have roughly five seconds to convey the clients name, the service they provide, and how to contact them,” says Noble. “This means designing large, clear, and bold graphics.”

“Another important factor, when assessing which product and type of vinyl to use, is the customer’s expectation for the life span of the graphic and whether it’ll be outdoors and exposed to the elements or indoors,” adds Hain. “A short-term promotional graphic for point-of-purchase purposes or a campaign-related vehicle graphic with an expected life span of six months to a year could be printed on a calendered vinyl.”

Plan the design so that it fits around the vehicle’s wheel wells, air scoops, door handles, and other three-dimensional areas that distort images and put spaces between words. “Bleed will be added at this stage and must surpass the boundaries of the body panels. Paneling is an important step and must be done in a way that’s minimal in appearance while, at the same time, conserves material usage,” says Noble.

Printing the wrap is pretty much out of the designer’s control, but advancements in technology have made this portion of the process smoother. Pat Rawlins, a conceptual artist from Dripping Springs, Texas who designs and creates large wall and building wraps (including the aforementioned library image), says, “When solvent-based printing on vinyl came on the market, it initially wasn’t the highest reproduction quality and resolution. After several years though, the solvent systems matured, and the banding and splotchy low resolution products were a thing of the past.”

Rawlins always makes certain that when he uses the 3M™ Controltac™ Graphic vinyl film with Comply Series 180C that has been laminated with a certified matte laminate. “If you print solvent ink on vinyl and then laminate it too early, it can affect the adhesive, as well as the laminate,” he warns. “A solvent print on vinyls should always have adequate drying time.”

Noble, who uses Avery Dennison products, likes the air quality for temperature and humidity controlled by the printer. “They affect the quality of the finished vinyl,” he says.

The third and final phase for a successful wrap project, installation, has to blend many components to make the work look its best. Preparation counts. Clean the surface with alcohol (especially wheel wells, undersides on bumpers, along the rocker panels, and anywhere that dirt will cling and harden). One can use a citrus-based product called 3M Primer 94 for this phase, as well.

It’s important to plan the installation before application begins. Installation takes experience and care. Practicing with old material on scrap surfaces can get expensive—but not as expensive as a poor application on a paying customer’s project. Along with sloppy work goes the company’s credibility and reputation.

As the install progresses, trimming and finishing the graphic may be the step that take the longest to master. “Take your time and be sure to use a sharp knife,” advises Noble. “Never cut on the painted surface. Finally be sure to heat set all the edges to ensure the life span of the graphic.”

John Carthey of Corporate Installations in Houston, Texas applied Treble’s earlier-mentioned motorcycle wrap mentioned, and the install proved to be a challenge. “Over the past thirty-eight years, I’ve had the privilege of installing graphics on many different types of vehicles and equipment, but installing full wrap decals on a drag racing motorcycle called ‘The Pistonator’ could be considered as one of the most challenging and fun installs I have ever undertaken,” he says.

Treble’s motorbike has limited surfaces for vinyl coverage. Only three surfaces could be wrapped, and Carthey managed to get something on each. “His motorcycle doesn’t have more than a couple square feet of flat area,” he explains. “The rest of the bike is multiple compound curves of four different levels. Number one is the front fender. Number two is the front wind faring. Number three is the body over the gas tank. And number four is the rear body that Craig lies on [while racing].”

Rawlins points out the importance of surface preparation for his work on the library wrap. “On several, we were able to specify the use of a good enamel paint and have it dry and cured for a week or two before the mural installation,” he says. “On most of the walls, the paint was just a good semi-gloss latex that had been painted for at least a year. The results on both were good, as I always use high-quality materials and printers to avoid problems later.”

Rawlins emphasized the importance of good, hands-on talent at the installation phase of a wrap project.  Find people who understand the relation between material and image and how to properly apply a wrap.  “For example, it’s very important to use people who really understand how the material behaves at all steps of the process,” he says.

Rawlins thinks the improvement in materials have put flat wraps on the map and made them as competitive as vehicle wraps. “For interior use, especially, the fade-resistant vinyl prints can be used in situations where they may last for over ten years. One of my vinyl murals has been up for about seven years in a library and looks as good as the day it was installed,“ he says.